The Blood of Olympus - Chapter 1

Night of Blood possible. They then rush into the attack. If the adventurers decide to retreat have them make Ride, Driv

Liber Vampyr - Secrets of the Blood 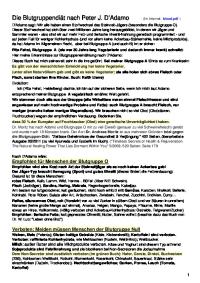 Chapter 1 Liadrin, her apprentice Galell and Dar'khan wake up, hanging upside down, in a troll sacrificial chamber. They had been on their way to fix a malfunctioning Runestone, with a mall escort of archers. She could have asked for a larger escort, but she didn't do so because the trolls hadn't attacked in a while.

They start arguing about how useful the others were during the attack, with Dar'khan calling priests unsuited for combat and Liadrin telling him that he'll be grateful for their powers when he's dying on the battlefield. She also tells both of her companions to remain quiet so they won't attract the trolls' attention because they'll put them to sleep again.

Whatever put them to sleep also seems to have made them unable to concentrate, so they can't cast spells. (Liadrin seems to be very faithful, talking about the Light's splendor and things like that.)

Two trolls enter with Lor'themar in tow and hang him in the middle of the chamber. Liadrin muses about having more reasons to hate trolls than other elves because they killed her parents. A witchdoctor enters and prepares the fumes that'll put them to sleep. He magically creates fire by saying Dazdooga, which might mean fire. The three trolls exit, not wanting to fall asleep too.

Lor'themar introduces himself and tells them that, if he manages to free himself, he won't leave anyone behind. The others agree, but Dar'khan seems somewhat less enthusiastic. They fall asleep and Liadrin has hallucinations in which Dar'khan turns up as an undead elf, Lor'themar is burned alive and Galell dies. The whole time, tiki masks tell her that they've been found guilty.

Liadrin wakes up and sees three trolls, who the ones chanting about the elves were being guilty. One of them, she presumes, is Zul'jin. He tells them that the trolls are like a nightmare that won't go away, and that, since they won't go away, they'll fight to the last toll. He wants to find out how to damage the Runestones, so he can get rid of the Sunwell and weaken the elves. He was, therefore, not responsible for the Runestone not working,

like she had feared. To do so, he plans to kill Lor'themar, knowing that he won't say anything, so the others start talking.

Galell frees himself and kills one of Zul'jin's friends with a spear, but not before Lor has gone through Zul'jin's ministrations... Liadrin manges to save Galell from Zul'jin by making the troll feel all the pain she had felt in the last hours. She tries to heal Lor, but her connection to the Light seems to be fading, and the more desperate she tries to use the Light the more it fades.

Zul'jin fakes still being under her spell's effects and manages to grab Dalell. Liadrin feels a pull, which I thought meant that Dar'khan was using them to cast magic, but he just managed to concentrate, and the pull was him teleporting them. Zul'jin is obviously not amused, but what can he do?

Chapter 2 - Part 1. Liadrin are at the Suntower, a location to the north of Silvermoon but south of Quel'Danas. (Probably in the 1-5 zone.) The reader gets told about the importance of the Sunwell, the fact that the high elves' ancesotrs had to leave Ashenvale because of their predisposition towards the arcane and that Liadrin can feel and see the Sunwell's light even at this distance.

Liadrin starts remembering the ceremony where Sylvanas elevated Lor'Themar to Alar'annalas, which means Ranger Lord, and gave him the ceremonial Fora'nal cloth, which seems to be worn as a cape. Sylvanas ends he speech with "belono sil'aru, belore'dorei", which means "shoulder your burdens well, child of the sun"".

Ladrin's mentor and the one who raised her, Highpriest Vandellor, wouldn't mind her hooking up with Lor'themar and his friend, Grandmaster Belo'vir tells him to stop trying to get her to date just because he never had any interest in doing so himself. Liadrin thinks that they act like an old married couple, that never fails to make her laugh.<