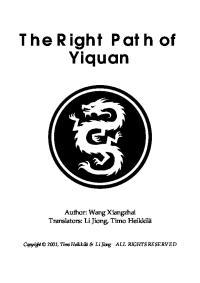 From the Right is a program of the International Human Design School (IHDS) All Rights Reserved. Copyright 2009 Jovian A

The Path to Satan

this book is truly from the lucifer him self , i found alot of secrets when i read it , thanx to Emperor Nuctulius for h

Pakua Zhang the Path of the Eight Diagram Change (Final)

A Note from the Translators

Training the Muscles, the Tendons, and the Bones

Syncretism of the Five Elements

The Classical Method of Hand-to-Hand Fighting

Disclaimer The copyright of this translation belongs to Timo Heikkilä and Li Jiong, all rights are reserved. Any kind of redistribution of this writing, or any part of it, is a criminal act. This E-book may not be resold or given to others, neither for free or in exchange for money or anything else. Piratism, despite being a crime, will also lead to no further translations being made – the translators need to get paid for the work to make their living and are very thankful to all of you who have bought this E-book.

A Note from the Translators This is the second, revised edition of ”The Right Path of Yiquan”. The first edition was published on December 7th, 2000. The corrections are mainly grammatical and some words have been changed to make their original meaning clearer. We want to express our deepest gratitude to everyone, especially Bertram Chock, who has helped us making this translation better. ”The Right Path of Yiquan” is the first book published by Mr. Wang Xiangzhai. It was published only a few years after the founding of Yiquan. Although Wang states Damo as the founder of Yiquan in the book, one should know that the training methods of Yiquan do not originate from those ancient times, only the essence, which is also the essence of Zen. At the time Wang Xiangzhai wrote this book, his approach to physiological things was a very traditional Chinese approach, which many of the western readers might find hard to grasp. For example, Wang writes about shrinking the bones, which we all know is physiologically impossible, but Wang wrote from his own experience, telling about the feelings he had personally had. Naturally he had not shrunk his bones, but the muscles around the bones contracting with a great force do indeed produce a feeling of tightness around the bones, which feels as if the bones were shrinking. We have added commentary to the text to make it more understandable for the western readers. All of our comments are in the footnotes, the comments in brackets were all written by Wang Xiangzhai himself. Still, many things cannot be truly understood just by reading them, they must be perceived in actual practice, even the best books can never be anything more than just helpful guides. We would also like to note that Wang Xiangzhai, and also many of his students, kept on developing the training methods of Yiquan even after the art

was founded and this book was published. Thus today, the training method of Yiquan is somewhat different from the times of this book, however, the essence is still the same. Later Wang stopped using concepts such as the tiger method, the dragon method, etc., but it does not mean that their essence did not remain it is not important how things are called or expressed, only grasping their quintessence matters. As the sciences progressed in the 20th century, Wang also came to critisize openly many traditional concepts, such as the Dantian qi, as inappropriate. There exist several different versions of this book in Chinese. Their differenc