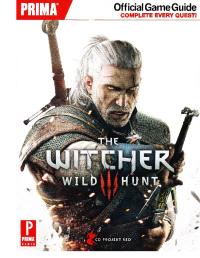 Official Game Guide COMPLETE EVERY QUESTI • • • TABLE OF CONTENTS FOREWORD 3 INTRO AND CHARACTERS .4 HOW TO USE

Contains the artbook of the game.Full description HOW TO USE THIS GUIDE

THE WITCHER 3: WILD HUNT - PRIMA STRATEGY GUIDE FOREWORD Every once in a while, there's a party in the office and the entirety of RED gets the chance to hang out together-we eat good food, drink good drinks, do karaoke, play games, well . . you get the point. Each time we get together, there's a particular feeling in the air. People come down to where the party is (the team works on many floors, and the party usually takes place on the ground floor), and, just after finishing a particular segment of the game, when you'd think people would like to get work off their minds, they start talking about what's cool about the game and what else we can do to make it even better. I remember how positively shocked I was when I heard that one of our artists actually roleplays the NPC whose house she's designing and decorating. "If I were an innkeeper, how would I organize my tavern?" she asks herself. "Would that work in real life?" that sort of thing. This, let's call it "ingredient X", is something truly empowering. It's real human emotion and a truly epic level of personal engagement; it's the will to pursue that unattainable perfection that's sometimes just around the corner, and to do it while having fun along the way. When you play Wild Hunt, it just oozes with that. From the grandest keeps and cities, to the little lonely bushes hardly anyone will even notice there's a bit of everyone's soul in this game. And the guide you're now holding in your hands is a map. The Witcher 3: Wild Hunt is an epic journey that puts you in the skin of a bounty hunter living in a dark fantasy world. You'll hunt monsters and tend to your gear, you'll be on your own and help, should you ever need it, is unlikely to come. It's you versus the horrors that creep inside primeval forests, murky lakes and the dodgy dark alleys of places you'll fear to visit. We've worked hard with the good people at Prima to make your life a bit easier-but just a bit. We wish you as much fun playing Wild Hunt as we had creating it. A giant world beckons to be explored. Godspeed! -Adam Badowski and the entire Wild HuntTeam

NOT QUITE THE DEVILS YOU THOUGHT

A conviction has arisen amongst both mages and the hoi polloi that witchers barely rise a hair's breadth above animals, that they are deformed and bloodthirsty mutants, and that in slaking this thirst they do not limit themselves to the fluids of monsters. Meanwhile the research and observations of Virgil of Ban Ard paints an entirely different picture of this caste. Of course, it is an indisputable fact that the mutations witchers undergo influence their temperament, immune system, strength and endurance, yet one cannot consider them unthinking beings forged only for killing as a result. In fact, witchers cultivate a unique culture, a specialized body of knowledge, an effective training system, and even a code of honor. They know an incredible amount about the effects of ingesting various organic and inorganic substances, and also a small amount, but nevertheless, somet